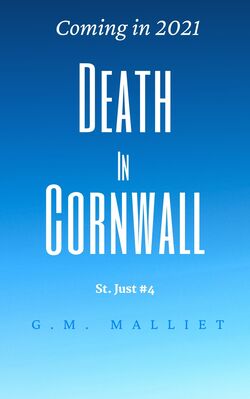 Death in Cornwall
It's official: The fourth book in the DCI St. Just mystery series is DEATH IN CORNWALL and it will be published in the UK October 2021 from Canongate/Severn House. Ebook publication and print publication in the US to follow shortly.

It's a story in which St. Just is on holiday with Portia De'Ath in the beautiful seaside Cornish village of Maidsfell.

Once again, murder disrupts their plans for a peaceful escape.

A fuller description from the jacket copy:
To celebrate their engagement, DCI Arthur St. Just and Portia De’Ath visit the quiet village of Maidsfell in Cornwall. Upon arriving they find the villagers in an uproar over plans to redevelop the local seafront.

The fishermen want to build a new slipway to aid their business, but many residents worry it will spoil the view for tourists, who help drive the economy. After a heated village meeting on the issue, St. Just overhears an argument involving Lord Bodwally – an unpopular aristocrat staunchly opposed to the plans. Later, Bodwally’s lifeless body is discovered. It’s murder.

Although Bodwally was disliked, who would go so far as to kill him? St. Just, although an outsider from Cambridge, feels compelled to help local authorities investigate. Is Bodwally’s death linked to the seafront, his suspect business dealings, or a secret from the past? One thing is certain, the fallout threatens to change Maidsfell forever . . .