Death at the Alma Mater 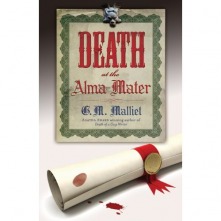 The third book in the DCI St. Just mystery series, Death at the Alma Mater, appeared in January 2010. Here is a summary:

St. Michael's College, Cambridge, is prestigious, stately, and in frightful disrepair. To replenish the college's dwindling coffers, the Master holds a fundraising weekend for wealthy alums. But all goes awry when the glamorous Lexy Laurant is found viciously strangled to death. Gorgeous and successful, Lexy inspired jealousy, envy, and spite in everyone. There's a lengthy list of likely suspects: Lexy's debt-ridden Latino lover, her novelist ex-husband who jilted her, and a hot-tempered Texan once rejected by the victim, among others. As Detective Chief Inspector St. Just weighs clashing egos, he discovers unsavory secrets...and a most shocking twist.

Death at the Alma Mater is also available in large print.

Discussion questions for your book club can be found here.